The day is finally here. The day many of you have been asking about since last July when I moved in to my first house. The day where I show you where I spend my days, my nights and my in betweens.

I’ve decided to break it all down into posts about different rooms. Bite size pieces are much more manageable than one lump some, or so I think. They’ll be spread out over the next few days for your perusal. As with any house things are always changing and being updated, so this is really only the starting point. 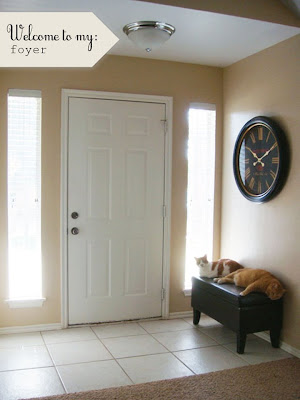 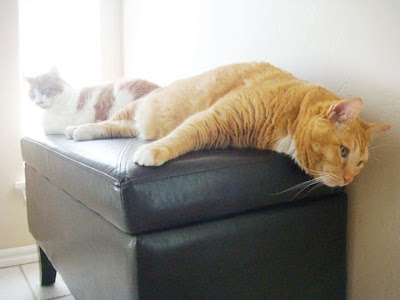 This is basically the extent of what goes on in the foyer. Easily one of the most boring areas in the entire house. Peanut and Roxy think the bench is theirs and use it all of the time. Sun-bathing being on the more important in their lives and all. Peanut also likes to keep watch over the front yard from this vantage point. 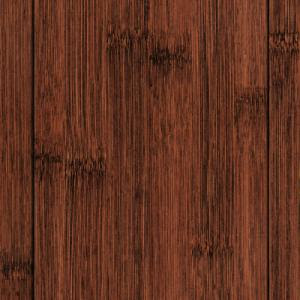 The big picture plan is to eventually tear up the white tile and carpeting and install something like this bamboo chestnut flooring throughout the house. The tiles are textured, which makes them really difficult to keep clean, especially in the kitchen. The oatmeal colored carpeting was brand new when I moved in, but I’d love to get rid of it. Although I’m suspecting anything else wouldn’t hide hairball stains half as well! 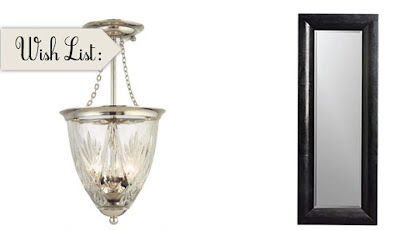 On a smaller scale, I’d love to replace the light fixture. Then ditch the bench and clock and lean a large scale mirror against the wall.

Next: the Living Room 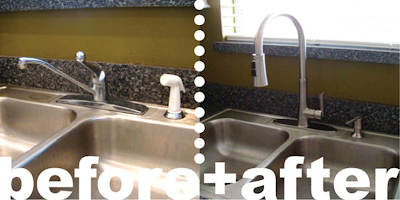 Ever since moving into my house last July one of the things I couldn’t wait to replace was the shoddy old kitchen faucet. It took nearly a year, but with the help of my mom and stepdad (okay, mainly my stepdad) I can call it finished! I love the new faucet’s gooseneck shape and the pulldown hose feature. There are two buttons on it that allow you to flip back and forth between stream and spray and needless to say, well, I kind of feel like a rockstar in the kitchen now! If you like it as much as me you can check it out here. One more project done and in the books!

PS: Sorry for the bad lighting in the photos – the weather was all over the place yesterday!

I just picked up this Chocolates oversized postcard from YeeHaw Industries. It’s unusual size is perfect to hang on the backsplash in my kitchen. Can’t wait!

Through Her Eyes: Week 4.

If you haven’t already, pop on over to Layers of Meaning for the last week of this month’s Through Her Eyes series where we gushed about our blogger crushes! Lil Bee I’m lookin’ at you… 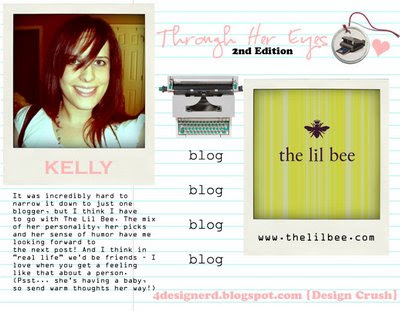 And one more thank you to Maria Fe for including me in this fun project!

Through Her Eyes: Week 3.

Week 3 of the 2nd Edition of Through Her Eyes is up and running over at Layers of Meaning. This week is all about significant others and my choice was my sweet Peanut. (No one tell Roxy, she’ll be pissed!) Head on over to check out what the other ladies said! 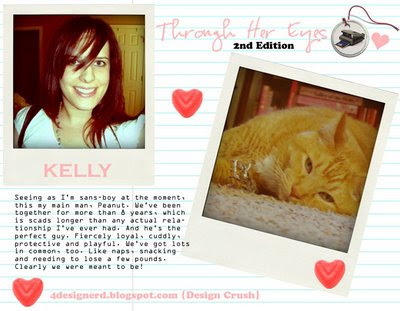 Through Her Eyes: Week 2.

Hop on over to Layers of Meaning to see the second week of the 2nd Edition of Maria Fe’s Through Her Eye’s series. This week it’s all about favorite childhood stories and photos. I actually asked my mom to send me one of her favorite pictures of me as a kiddo and this is what I got. I’ve always been the victim of some wicked bedhead! 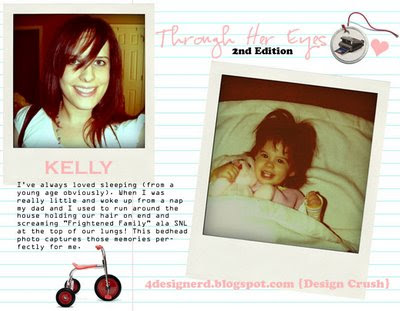 Have you seen the fantastic series Through Her Eyes going on over at Layers of Meaning? If you haven’t you should. And even if you have you should check it out again. Because today starts the 2nd Edition and, um, well, I’m a participant! This week you can check out what me, as well as all of the other ladies, are toting around in their purses. 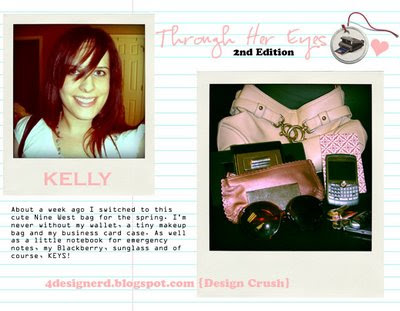 PS: Thanks to Maria Fe to putting together this fun and revealing project!

PPS: If you haven’t checked out the blogs of the other ladies involved swing by!

Lately I’ve been hearing some mumbled meows around the house. From what I can gather there’s a little bit of passive aggressive behavior going on (ignoring the litter box in favor of other areas and who knows what else) due to lack of blog fame.

Some other blogger’s pets (Paco, Morran, Chuck and nameless others) get screen time and, well, Roxy and Peanut don’t. I need to remedy this asap for the sake of my carpeting, so I’ll skip right to the introductions.

Name + Origin: Roxy, after the clothing line for surfers, natch
How We Met: given to me by my mom’s neighbors – straight from a farm in Arkansas!
Birthday + Sign: August 10 + Leo
Hobbies: sleeping, cleaning herself, hacking up hairballs from previous activity, flopping, chattering
Likes: lasers, bubbles, salty snack foods
Dislikes: when Peanut tries to get some lovin’, strangers
Arch-nemesis: my mom’s cat, Jack

So now, hopefully, we have all that cleared up. Welcome to Design Crush, Roxy and Peanut. You make my every day so much better.

Here’s the back story of my cabinet.

This small china cabinet sat in my grandparents’ basement for a good 40 years before I got my hands on it. How it got there is another story: my dad found it waiting to be picked up by the garbage truck in front of a neighbor’s house. He used it to display his model collection (so cute!) for a few years before it was relegated to the depths of the basement. There it languished and accumulated old carpeting tools and other bits and pieces. And a ream of old typing paper, which is what I remember it most for. 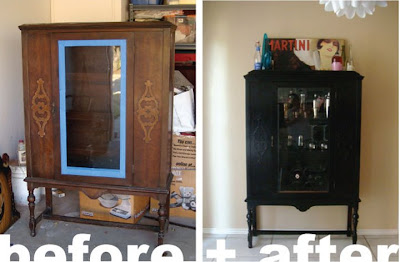 A few years ago I was living in Cleveland and getting ready to move to Oklahoma City. I asked my grandma about the old cabinet in the basement and if she wanted it any longer. My dad drove it up to my apartment in the back of his pick-up and it was mine. And it sat in a garage for almost three years.

I knew something needed to be done to make it presentable (the years in the basement hadn’t been kind), but didn’t think the wood would stand up to refinishing. So painting it was. And glossy black it became. It now houses the majority of my barware collection. I love how the stainless steel pops against the black! 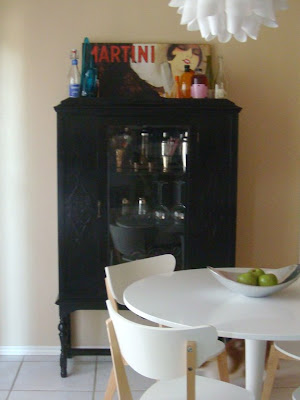 Check out the Q+A I answered for Whitney English about my desk. Well, technically my old desk since I’ve moved to my own office since shooting these pictures – yahoo! Thanks for having me, Whitney!