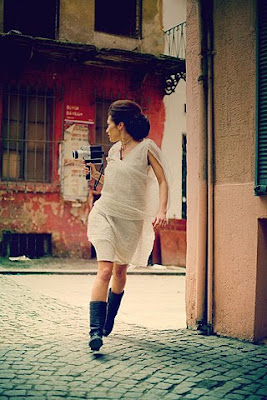 I think I lost him…

Thank goodness I decided to wear these black boots and not those white stilettos my high-fashion mother wanted me so desperately to don on my wide, athletic feet. These cobblestone streets and high heels would have been a recipe for disaster. Or at least a host of cuts and scrapes taking residence on my knees.

No one could understand why I wanted to wear a short white dress. Non-conformist they called me. Who wears a short white dress? I do, I told them. I will, I asserted to them. I am, I proclaimed to them when they greeted me after the ceremony. It was then that they ceremoniously glanced from my perfectly pinned back hair on down to the thin strand of pearls around my neck and sighed with relief. ‘At least she did two things normal’ they were thinking. ‘Normal’. I had begun to hate the word about 6 months ago and it made my blood boil more and more every time I heard it. Why do things have to be ‘normal’? Why can’t they have personality? Or just be our way? Why not?

The plan was hatched after the third month of hearing “Why not do it this way? It’s the normal way to do it.” There was a reason we suggested eloping a year ago. It was to avoid days like this but of course neither side of our families could accept it. So as we went along with “their” plan, we wrote up our own. After the cutting of the cake we would each sneak off without detection; everyone would have had their fair share of champagne, vodka gimlets, and sugar by then. They wouldn’t notice as we left out of separate exits only to meet about 10 minutes away at our favorite bistro. They wouldn’t notice a thing.

And they didn’t. Except the photographer. I couldn’t help myself! I wanted to document the first day of the rest of our lives. As I was sneaking toward the exit to make my escape, I realized that I hadn’t brought my own camera and the hired photographer’s would be the one that I was taking with me. And so I grabbed it and ran.

And here I am now. One block away from my new husband; who will be ready to run away with me. To live our lives the way we want. As non-normal as we want. With a ‘borrowed’ camera and all…

:: written by Jennifer of Capturing the Seven